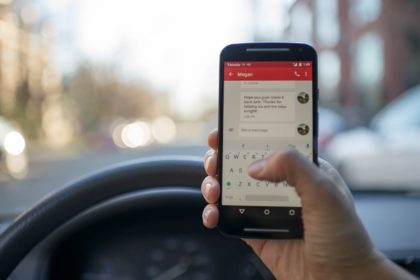 We all know that the use of mobile phones is banned whilst driving.

The answer, according to the High Court’s recent decision in Director of Public Prosecutions v Barreto [2019] EWHC 2044 (Admin), is that it depends what you’re doing with it.

What did Mr Barreto do?

Ramsey Barreto was convicted in the Magistrates’ Court of using his phone to film an accident while he was driving. The prosecution was under s 41D of the Road Traffic Act 1988 and Regulation 110 of the Road Vehicles (Construction and Use) Regulations 1986.

What do these laws say?

These provisions make it an offence to use ‘a hand-held mobile telephone or other hand-held interactive communication device.’

How did Mr Barreto overturn his conviction?

Barreto appealed his conviction to the Crown Court. The Crown Court acquitted him on the basis that videoing on a phone did not come within the definition of the offence. This was because no interactive communication was taking place.

The Director of Public Prosecutions, head of the Crown Prosecution Service, appealed on that point of law to the High Court.

As the High Court pointed out, the Crown had assumed the legislation banned all use of mobile phones. Mr Barreto said that was not the case.

What did the High Court say?

The High Court agreed with Mr Barreto and the Crown Court. He was allowed to go free without a stain on his character. The Court said:

“The legislation does not prohibit all use of a mobile phone held while driving. It prohibits driving while using a mobile phone or other device for calls and other interactive communication (and holding it at some stage during that process).”

Does this mean you can play Candy Crush while you’re driving?

No, probably not. The High Court made the point in their concluding paragraphs, saying:

“It should not be thought that this is a green light for people to make films as they drive. As I have already said, driving while filming events or taking photographs whether with a separate camera or with the camera on a phone, may be cogent evidence of careless driving, and possibly of dangerous driving.”

There is also a related offence (although it carries fewer penalty points) of not being in control of a motor vehicle.

Once again, road traffic law has proved to be one of the trickiest areas of criminal work. Don’t leave your licence to chance. Ensure you use a firm that is fully up to date with all developing legal arguments.

If you need specialist advice in relation to any criminal investigation or prosecution, then get in touch. Call John Howey on 020 7388 1658 or email jhowey@jfhlaw.co.uk and let us help. We can advise on all aspects of your case.