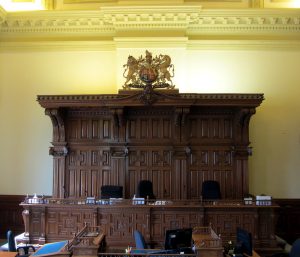 In cases where there is more than one defendant, it is a common scenario that one or more pleads guilty, perhaps at an early stage, but others continue their case to trial. When should those who plead guilty early on be sentenced?

A question then arises as to whether those who have pleaded guilty earlier should be sentenced immediately, or at some other point.

The starting point is that a Judge should await the outcome of the other defendants trial, to be as fully appraised of the facts as possible.

“It may be a very convenient course to sentence prisoners who plead Guilty on the first day, but that ought not to apply where several persons are indicted together and one pleads Guilty and the other or others Not Guilty. In such a case the proper course is to postpone sentence on the prisoner who has pleaded Guilty until the other or others have been tried and then to bring the prisoner who has pleaded Guilty up in the Court where the other or others have been tried and let all who have been convicted be dealt with together, because by that time the Court will be in possession of the facts relating to all of them and will be able to assess properly the degree of guilt among them.”

“It is a most inconvenient practice and it is a practice which is wrong and which ought to cease. [Courts] should be informed that where more than one prisoner is joined in an indictment and one pleads Guilty and the other or others plead Not Guilty, the sentencing of the first one should be postponed until the others have been tried and all whose guilt has been established should be sentenced together. I hope that [Courts] will take notice of the opinion of this Court and discontinue a practice which can only lead to disproportionate sentences being passed and will naturally leave a sense of grievance in the minds of prisoners.”

If a defendant who has pleaded is to give evidence for the prosecution it was the practice to sentence that defendant before giving evidence, but that rule is no longer followed, and the modern method is to default to the position of sentencing all defendants together.

The default position remains the same for a co-defendant who is intending to give evidence on behalf of another defendant in the proceedings (Coffey (1982) 74 Cr. App. R. 168, CA.)

Where a defendant is in custody and has already likely served any sentence they would receive, this is a compelling argument for sentencing early. However, it again remains a matter for judicial discretion.

In almost all cases where a defendant has pleaded guilty, they want to be sentenced sooner rather than later, to accept the punishment and move on with their lives. Where appropriate, we will always advance a robust argument to the Court to persuade a Judge to sentence early.